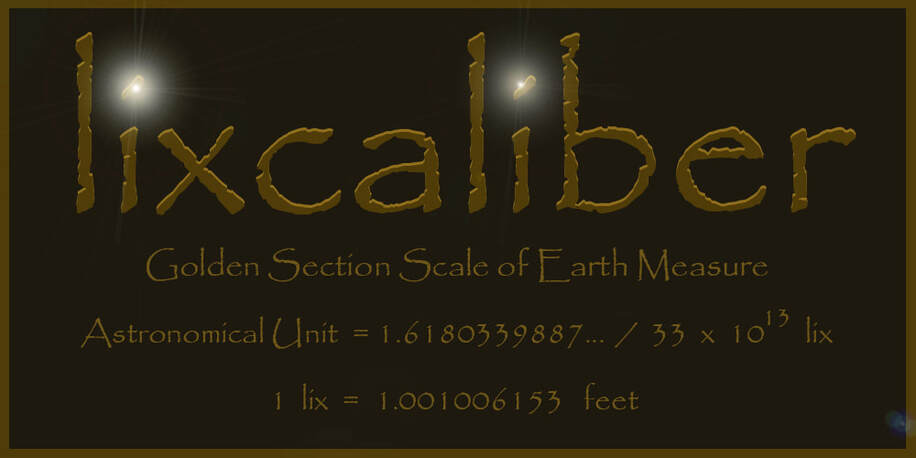 "3Ten ( triten ) Measure, the Legend of Joey Bee", plots planetary mean distances
on an expanding golden ratio grid, with, "lixcaliber", the Mother of all scales,
found embedded, now emerging, from the heart of the Great Pyramid
through slope angle, 5E. 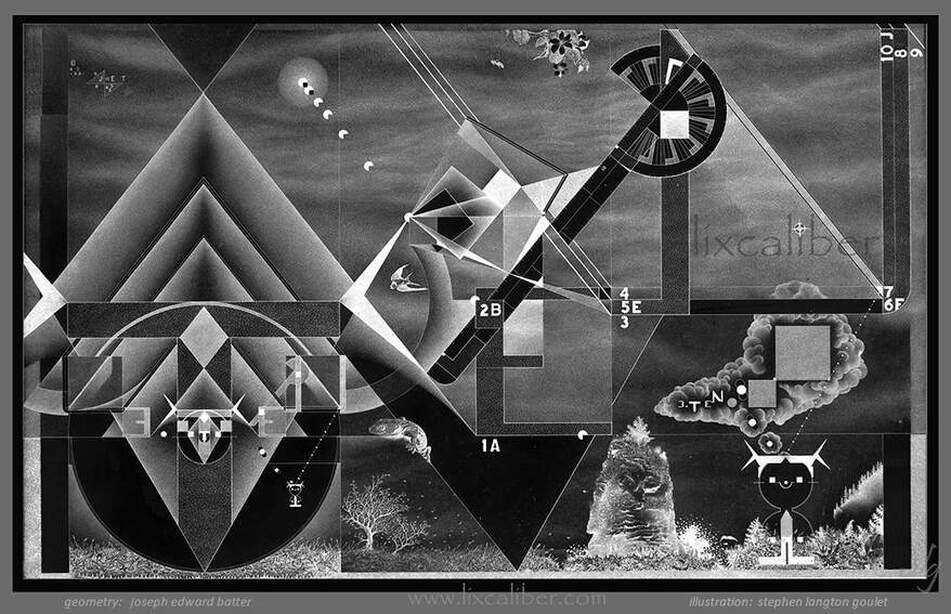 From 1980 through 1993 Joe Batter and i produced three more scale drawings based on
the "pyrameter", a triangle Joe found within pi, phi and the slope angle of quartz crystal,
marking the angle between the base and the height of the pyramid as slightly less
than 90 degrees. All the block courses slope nearly four minutes of degree
down towards the center.

Application of the pyrameter triangle accounts for the integrity
of this ancient structure as earthquakes tend to tighten the joints.

phi, pi and the slope angle(s): 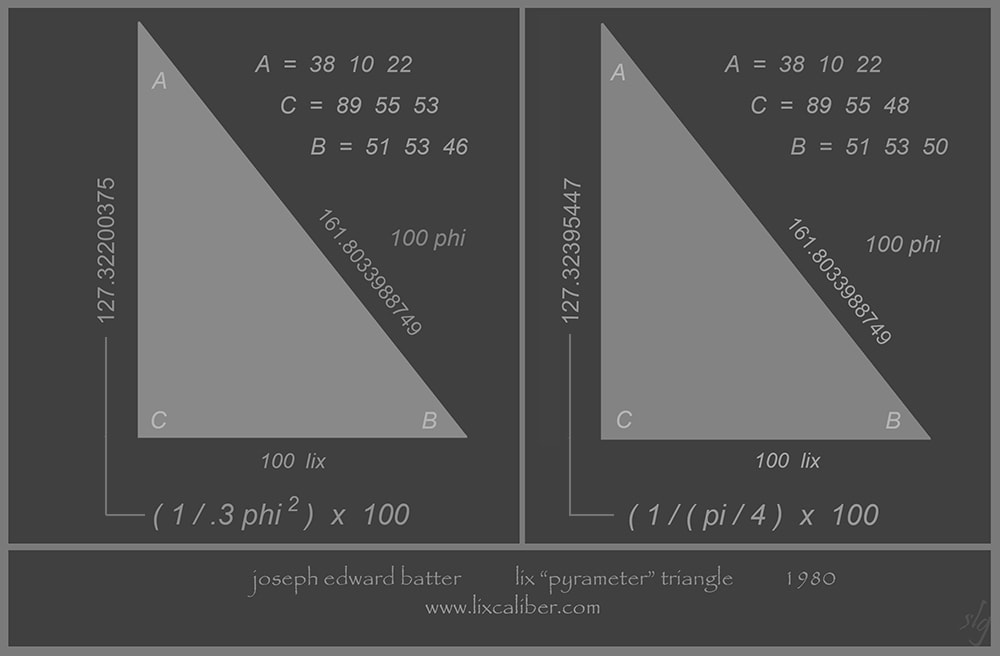 "Never chase after buses, wo\men or cosmological theories.
There will always be another along in a few minutes" Isaac Asimov


The Astronomical Unit and the Soul of the British Foot

The AU, the mean distance from the Sun to the Earth, is the basis for measuring long distances
within the Solar System. Joe Batter suspected it was the source of a universal unit of measure.
At the time, he was plotting Planetary mean distance measurements from the 1979
Astronomical Ephemeris, with feet, in tenths, 1/600.

Because he was working to a high degree of accuracy a remarkable order of co-incidence
occurred within the Planetary mean distance numbers. When the pattern wouldn't gel
i began to suspect the unit might not be the British foot after all.

One of the exercises Joe performed with the A.U. in feet
was to multiply it by the number 33:

He noticed the result is a close approximation of the Golden Section
and divided it by 1.618033988 to produce the conversion ratio:

Conversely, dividing the Golden Section by 33 produces the AU, though not in feet:


Joe applied the "ancient" conversion to other known measurements such as
the remaining planetary mean distances, light speed and the Great Pyramid at Gizeh.
The results confirm the existence of a base 10, inter-planetary System of Measure,
founded in the Golden Section and pi.

He named the System "TriTen" and the unit "lix".

This introduction reveals some of the "phi nominal" rediscoveries we've made with them.


Walking you through 3Ten is our next trek.

I've been inside lix geometry over four decades now, with related webpages produced,
maintained and upgraded continuously since 1996. I knew the module, 73.728 lix, found
in 2008, would one day lead me out of the chambers and, in one day, it did.

Most of the focus these last number of years was assembling sister site, brainelevator.org;
merging the upper and middle chambers into one. Last week the work took a dramatic
turn when i noticed three squared dimensions of the, "Hi Phive", chamber
adding up to the Pyramid base perimeter.

Join me, "outside the boxes", for a brief thousand+ pace stroll around
the most well known and least understood construction project on Earth.


Every square describes three circles.
The inner one touches the sides, the outer, the corners.
The ratio between these two is the square root of 2.

The third circumference, in between the two, is the sum of the four sides of the square.
The ratio between it and the diameter of the outer circle is the square root of 8. 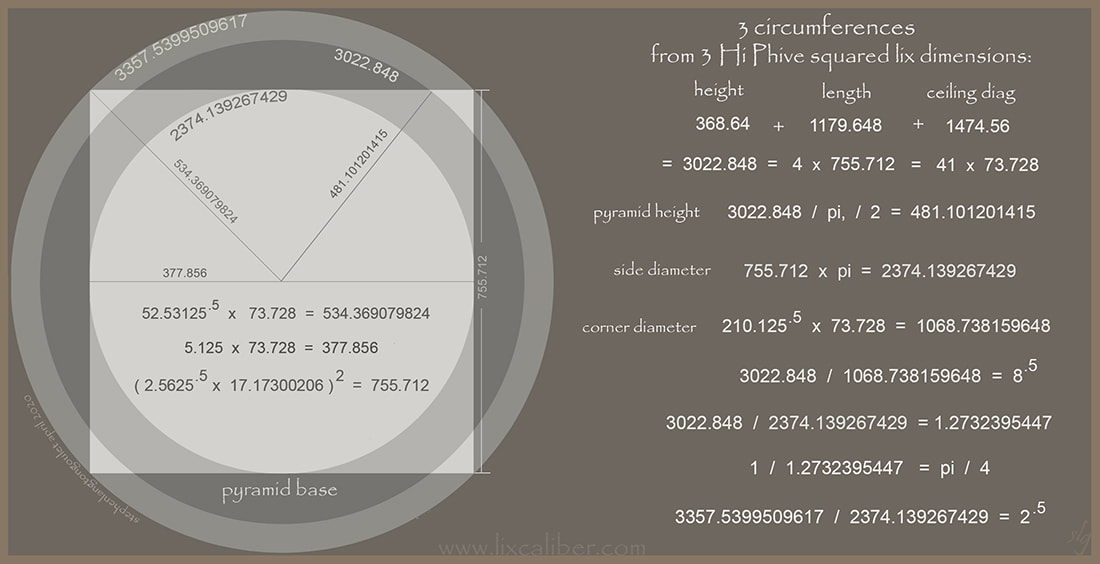 Recently, following the, "Electric Universe", evidence and theories at, Thunderbolts,
as well as the remarkable plasma Sun experiments conducted at Safire, it occurred to
me, the astonishing ratios and exact dimensions circling the pyramid base, and height,
may also be describing Hannes Alfvens', "double layers", and the cross section of
a "Birkland current", at extremely precise frequencies.

Ever wondered what the geometry of a, "Z-pinch", looks like?

Joe Batter was fascinated with a geometric model he called, "the basic shape of energy",
the "cone-cube". Six, 45 degree cones radiate from the centre to the 6 faces of a cube.
The volume of the cube, divided by the volume of the cones, is also pi / 4.

Joe's initial encounter with an application of the cone-cube,
in the mid-seventies, was the original spark that lit our way.
All the way back here.
"something's afoot"
April 13, 2008

Our rediscoveries of the lix unit, the scale lixcaliber, planetary geometric centers,
the dimensions of the chambers, the modules, and a myriad of other wonders, are the
results of nearly two lifetimes of attention to detail and accuracy. Much is owed to
the master surveyors who marked the lines before our time, and more yet
to Pythagoras, Euclid and their teachers.

A paper structure of equal volume could be built beside the Great Pyramid from
all the speculative works to reference its grande design. No esoteric meaning is
ascribed here to basic ratios so elegant, so profound, so legible, any interpretation
i might provide as an artist, would be woefully inadequate as i am, by no measure,
a mathematician, archaeologist,  engineer or prehistorian to offer such context.

That being said, bairn of pi and phi, "lix", dimensions are eternal, here long before
the first Myths were recorded. Here well after the last ones are gone to dust.

In the face of resplendent measurement codes, ratios and numbers, extensive
reflection will achieve far greater insights than intensive conjecture ever has.

Embedded in the "stone hearth of phive" resides the universal scale, "lixcaliber",
not as Arthurian weapon; tool for Passion, Division and War, but as Arthurian
ideal; instrument of Reason, Unity and Understanding.

In another age people were inspired enough to strive together for a generation, to
dress and seal their knowledge of, "Earth Measure", inside a crystalline mountain:

They clearly intended rediscovery. Whether by this era remains to be seen.

An introduction to the, "lix coffer code", and its relationship to the planetary
positions on the lix grid, above, will be presented here next.

Curious why a chessboard is divided, 8 x 8? 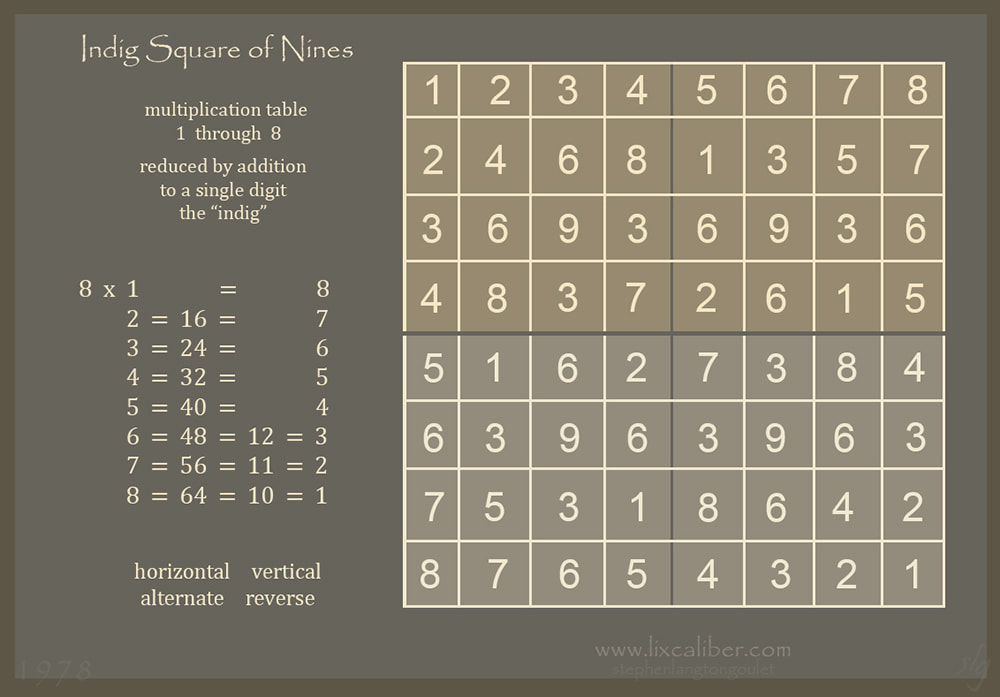 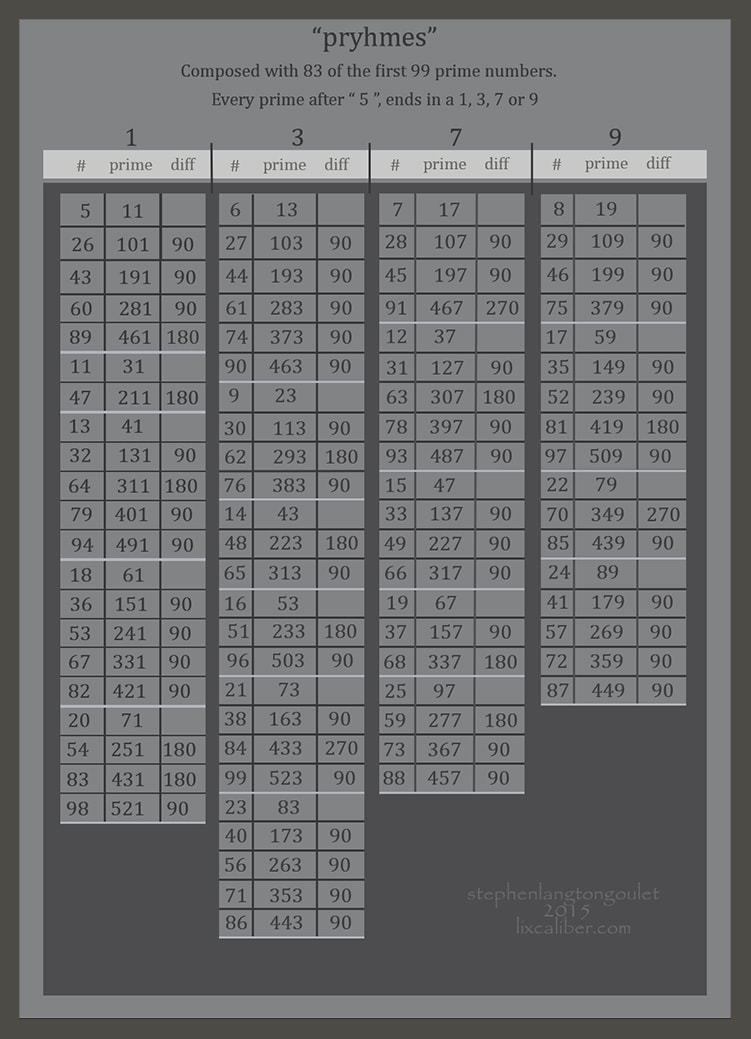 A letter is to a word as a number is to a sentence. 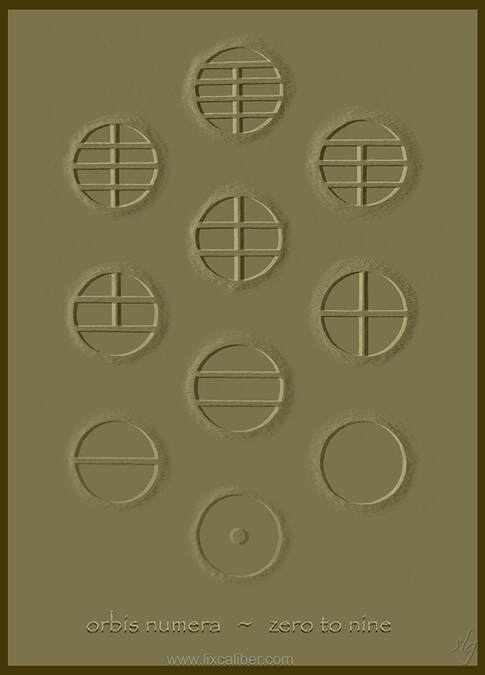 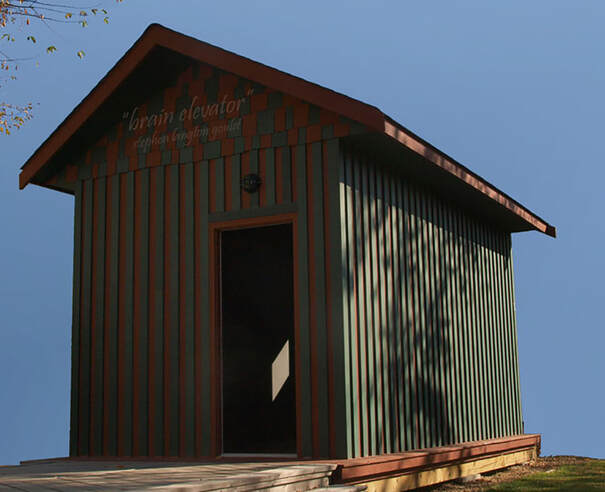 Here's another application of lix geometry, an artifact for your perusal,
rediscovered within the Great Pyramid at Gizeh
in 2008: